The Marriage of Editha with Sigtrygg, King of Northumbria windows 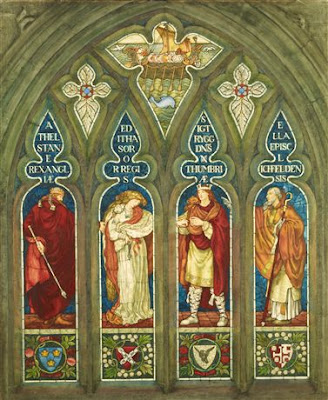 The Marriage of Editha with Sigtrygg, King of Northumbria
By Ford Madox Brown, Thomas Matthews Rooke
1909

This watercolour is a copy of the first window of the south side of the Chancel Clerestory, St Edith's, Tamworth, Staffordshire depicting Athelstan, King of the West Saxon's giving away his sister, St Editha to Sigtrig, King of Northumbria, who places a ring on her finger as Aella, Bishop of Lichfield looks on. The Whitworth Art Gallery, Manchester, holds the original cartoons for this window which date from 1873.The designs appear to have caused some controversy as a letter from Dante Gabriel Rossetti to Jane Morris suggests:'Some of cartoons of Old Brown's (made for Top's [Morris'] firm) are being published in an architectural paper. Really I must say they are inconceivable. Every figure (it is a long series) is passing one hand through the stone mullion of the window into the next panel of glass!!-each panel containing one figure. It is called the Story of St Edith. I must say if this series was what reduced Top to desperation, I think every one would have sympathised with him [replacing Brown as designer] if he had only shown the cartoons' (John Bryson and J. C. Troxell, Dante Gabriel Rossetti and Jane Morris Correspondance, 1976, p. 86).Evidently not everyone thought Brown's cartoons were badly conceived and J. R. Holliday, an avid collector of Morris and Co. stained glass cartoons, commissioned three watercolour copies of the windows from Thomas Matthews Rooke (1842-1942). According to a letter written in 1935 by G. S. Holliday'Mr Holliday took photographs of [the windows] & enlarged them & prepared them for Mr. Rooke ... to colour from the originals. Mr Rooke spent some weeks [at Tamworth] on the work (by special arrangement with Mr Holliday who was satisfied that it was a good reproduction of the colour in the windows themselves)' (Unpublished letter from G. S. Holliday to Dr Bonseer, 29 March 1935, BMAG).Rooke worked as Burne-Jones's studio assistant from 1869 until the latter's death in 1898. From 1878 until 1893 Rooke also spent half of his time producing watercolours for Ruskin's project to record old buildings threatened with demolition or restoration. Rooke was a talented painter in his own right and produced watercolours and oils of religious, imaginative and architectural subjects. LM
http://www.preraphaelites.org/the-collection/1959P40/the-marriage-of-editha-with-sigtrygg-king-of-northumbria/
Posted by Hermes at 7:31 AM