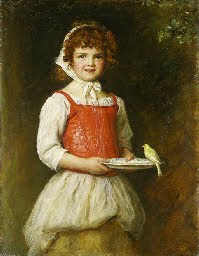 Already suffering from the illness from which he died three years later, Millais only sent four comparatively small pictures to the Royal Academy in 1893. Among them were the last two examples he was ever to exhibit of the winsome studies of children that had proved so popular over the years, the so-called 'fancy' portraits for which Gainsborough and Reynolds had provided illustrious precedents. One was the present picture, the other a companionpiece called Pensive (private collection). The latter showed a dark-haired girl in a white muslin dress with a yellow sash, standing in profile against a light background; holding a spray of purple clematis, she had a meditative expression which explained the title. The two works were variations on the Miltonic theme of L'Allegro and Il Penseroso that had attracted the attention of so many Victorian artists. Indeed Millais himself had painted a pair of pictures called Allegro and Penseroso in 1887, each showing a three-quarter length figure of a young woman in a garden, with appropriate attributes (Memorial Exhibition, Royal Academy, 1898, nos. 167 and 173).

When the picture was exhibited in 1893, the warmest praise came from F.G. Stephens, the artist's former Pre-Raphaelite Brother now art-critic of the Athenaeum. 'Merry', he wrote, 'a pretty little girl with ringlets of bright, light brown hair about her rosy face, which wears a happy smile, is thoroughly charming in its naturalness. Her likeness is one of the best of Sir John's numerous productions of the kind. In one hand the child holds a plate, upon the edge of which a tame canary has alighted, and sings with all its heart, as if it were a partner in her happiness. Neither Sir Joshua nor Romney, admirable painters of children as they were, has left anything freer of self-consciousness, or more truly representative of innocent human gladness. No living artist, and few that are dead, could have painted with more brightness and vivacity the perfect carnations of the little one, or given us a better piece of light and colour.'

The sitter's costume and the Delft plate create a rather 'Dutch' effect. Millais had looked at Rembrandt and Hals when he was evolving a bolder and more painterly style in mid-career.
http://www.christies.com/lotfinder/sir-john-everett-millais-bt-pra-merry/1820628/lot/lot_details.aspx?pos=7&intObjectID=1820628&sid=&page=2
Posted by Hermes at 1:00 PM