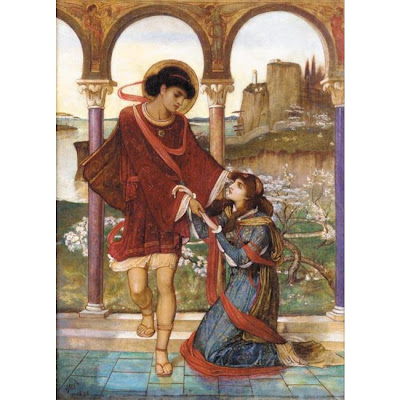 Of all the followers of Pre-Raphaelitism who originated as acolytes of Burne-Jones, and who carried the Romantic impulse in English painting into the twentieth century, John Melhuish Strudwick was the most devoted to the vision of a strange and magical dream-world. His paintings have a wistful and poetic quality that beguiles, compelling the viewer to search for a closer knowledge of a sphere of existence which, despite being so clearly observed, derives entirely from the painter’s imagination.

The present painting of The Annunciation represents Strudwick’s distinctive style in its first florescence, when his colours were brighter and compositions less shadowed than at a later stage. The reds and blues of the draperies, the turquoise of the pavement and the lapis lazuli blue of the right-hand column, and the freshness of the landscape, with its drifts of almond blossom, seen through the arcade placed across the width of the composition, are all characteristic of the painter’s early career. As George Bernard Shaw wrote in his important 1891 article on Strudwick’s art, ‘in colour these pictures are rich, but quietly pitched and exceedingly harmonious. They are full of subdued but glowing light; and there are no murky shadows or masses of treacly brown and black anywhere’.

Strudwick’s representation of the biblical subject follows the text in the gospel of Luke, chapter 1, verses 26-38, where Gabriel appears to Mary in the house of her father in Nazareth. Gabriel speaks the words ‘Hail, thou that art highly favoured, the Lord is with thee: blessed art thou among women’. In showing the Virgin fallen to her knees and limply extending her hands towards the angel, Strudwick seems to have been seeking to convey the account given by Luke of how, ‘when she saw him, she was troubled at his saying, and cast in her mind what manner of salutation this should be’. The painter departs from iconographic convention in various respects, for example in preferring not to show Mary interrupted in her reading from the book of Isaiah (in which the Prophet foretold the Virgin birth). Likewise, the dove that is usually shown as a symbol of the descent of the Holy Spirit from God to the Virgin has not been included. Lastly, Strudwick has chosen not to give Mary a halo, as she would have had according to traditional iconography.

Strudwick painted a number of subjects with Christian themes. One of his earliest known works was a painting of The Good Samaritan, of 1871. Later he painted subjects such as The Ten Virgins, of 1884, two versions of St Cecilia, of 1882 and 1896, and another entitled An Angel, of 1895. It is not known whether Strudwick was a man of religious faith, although he was presumably encouraged to follow Anglican observations at St Saviour’s Grammar School, where he was educated. His early interest in the Annunciation as a subject may indicate that he was devout at that period, while the reinvention of the theme in terms that depart from Catholic iconography is in keeping with attitudes of Protestant artists in the Pre-Raphaelite and Aesthetic circles from the mid-nineteenth century onwards.

It's lovely, and I can feel the quiet that George Bernard Shaw writes about.

I never thought of GBS as an art critic - though goodness knows he had opinions on everything else! I just love his colours - jewel like.