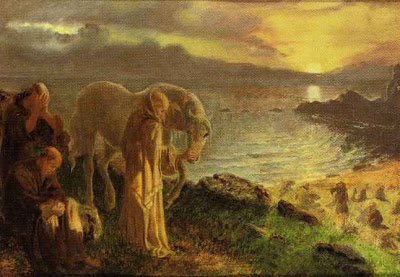 Alice Boyd was one of the most interesting women artists in the Pre-Raphaelite circle, although she has inevitably been overshadowed by the figure of William Bell Scott. They met in Newcastle in 1859, when he was master of the Governement School of Design and she was looking for someone to help her develop her artistic talent. Although Scott was married, they fell in love, and a ménage a trois was successfully established whereby Alice spent the winter with the Scotts in London (to which they moved in 1864) and they spent the summer with her at Penkill, her miniature Ayrshire castle. Many works by both artists were included in the Penkill house sale held by Christie's on 15 December 1992.

The picture dates from the period when the Scotts were living at 33 Elgin Road, Notting Hill, their address from the time they settled in London in 1864 until they moved to Bellevue House, Cheyne Walk, Chelsea, in 1870. This ties up with the name of the artist's colourman - William Benham, 9 Devonshire Terrace, Notting Hill, W - who evidently supplied the panel and whose label survives on the back. It shows St Columba on the island of Iona bidding farewell to an old white packhorse which, having a premonition of the Saint's death, has come, weeping bitterly, to receive his blessing. The subject was later treated by another Scottish artist, John Duncan (see John Kemplay, The Paintings of John Duncan, 1994, illustrated p. 109).

The picture's background owes much to the view of the Firth of Clyde and Ailsa Craig that can be seen from the battlements of Penkill Castle.