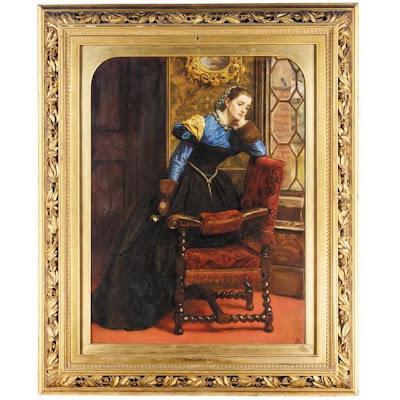 102 by 76 cm., 40 by 30 in
signed with monogram and dated 1864 l.r.; inscribed and signed on an old label attached to the reverse; Oh swallow flying from the golden woods/ Fly to her, and pipe and woo her and make her mine/ And tell her, tell her, that I follow thee. Tennyson/ John Everett Millais

John Everett Millais’s Swallow! Swallow! is a remarkable and beautiful painting, made during a fascinating transitional period in the artist’s career when he found himself poised between the formative experience of Pre-Raphaelitism and the new artistic principles associated with Aestheticism.

Millais had a particular feeling for literature, and the works of Shakespeare, Keats and Tennyson provided narratives for numerous paintings and drawings. In the mid-1850s he made a series of designs for the so-called Moxon Tennyson, an illustrated edition of Tennyson’s poetry to which various members of the Pre-Raphaelite Brotherhood and their associates contributed. This was a vital formative experience and one that taught him how to look for ways of expressing human predicaments in terms of mood, and to choose telling motifs which would indicate the state of mind of his protagonists. One of Millais’s greatest early paintings, and a work that represents the fulfilment of Pre-Raphaelitism in its primary phase, is Mariana (Makins collection, fig.1), of 1851. The subject, from Shakespeare's Measure for Measure, in its treatment of weary waiting on the part of one who is forced to be apart from her lover, anticipates the theme of Swallow! Swallow!.

Swallow! Swallow! takes its subject from Tennyson’s poem ‘The Princess’. Published in 1847, and containing memorable passages of lyric poetry gathered together into a medley, the verse tells the story of the betrothal of Princess Ida. Tennyson’s princess has modern ideas and sympathies, embracing causes such as the rights of women, universal education, and at the same time abjuring the institution of marriage. The opening of part IV of the poem describes a meeting between Ida and her suitor, along with his two companions. Set within the dialogue between them, which reveals the divergence of their views of how society should be ordered, are various poetic interpolations. One is the verse which opens with the line ‘Tears, idle tears, I know not what they mean’. Then comes the inset poem that purports to be recalled from memory and is spoken in the first person by one of the male figures present, and which opening with the lines:

O Swallow, Swallow, flying, flying South,
Fly to her, and fall upon her gilded eaves,
And tell her, tell her, what I tell to thee.

The lovesick narrator wishes that he could fly to the object of his adoration – ‘if I could follow, and light / upon her lattice, I would pipe and trill, / and cheep and twitter twenty million loves.’ The poem concludes with the verse quoted with the title of the painting:

O swallow, flying from the golden woods,
Fly to her, and pipe and woo her, and make her mine,
And tell her, tell her, that I follow thee.

The painting shows the woman who is the object of the narrator’s love. Although she seems unaware of the bird as it rests momentarily outside the window of her room, it is clear that she reciprocates the loving message that it brings. She gazes despondently and distractedly into an unseen space; while in her trembling right hand she loosely holds a white rose – which may be intended as a metaphor of her purity and innocence.

The painting had a particular personal significance for Millais. Eleven years earlier, in the course of the visit to Scotland that he made in 1853 with John Ruskin (and which led to his portrait of Ruskin standing on the bank of the Glenfinlas river), Millais had fallen in love with Ruskin’s wife Effie. In due course Effie left Ruskin to return to her parental home in Perthshire. Millais and Effie was forced to endure a period of agonising separation, lasting nearly two years, before she could be divorced from Ruskin. Finally, on 3 July 1855, she and Millais were married.

That these events had left an indelible mark on Millais is demonstrated by the fact that even in the mid-1860s he continued to treat themes to do with the trauma of separation. For example, his historical subject, The Romans leaving Britain (Sotheby’s, London, 14 June 2001, lot 38), exhibited with Swallow! Swallow! at the Royal Academy in 1865, shows the forced parting of a Roman legionnaire from his British wife. Likewise, Swallow! Swallow!, in which a girl incarcerated in her parental home, longs for news from the one who loves her and who she loves in return, clearly represents a memory of the distressing time when he and Effie could only communicate by subterfuge and never saw one another. Swallow! Swallow! reveals Millais longing to escape into a realm of imagination and other-worldliness, steeping himself in literary imaginings, but also tells much about an emotional travail which he had endured and which remained with him in his thoughts.

The tender quality of the painting is in addition a reflection of the warm affection that Millais felt for his sister-in-law Alice Gray – who served as the model for the figure. For a few years after their marriage in 1855 Millais and Effie lived principally in Perthshire, and it was during this period that Millais also formed a close bond with other members of Effie’s family. Alice, who was Effie’s younger sister, was born in 1845, and was therefore about nineteen when Swallow! Swallow! was painted. A beautiful girl, with large eyes of a dark blue, she had previously sat for a variety of Millais’s most distinguished works, including Autumn Leaves (Manchester City Art Gallery, fig.2), as the girl on the left side of the composition who holds the basket into which leaves are being placed, Pot Pourri (Sotheby’s, London, 5 November 1997, lot 193), as the girl who leans back in momentary interruption of her task of placing rose petals in a bowl, and Apple Blossoms (National Museums and Galleries on Merseyside; Lady Lever Art Gallery, Port Sunlight, fig.3), as the girl on the right side, who lies on her back and places a piece of grass between her lips. Alice was later to model for the figure of Celia in Rosalind in the Forest (National Museums and Galleries on Merseyside; Walker Art Gallery, Liverpool) in 1868. Among the portraits that Millais made of her are a drawing of 1853 (fig.4 and reproduced in Sir William James’s The Order of Release, 1947, facing p.146), and a beautiful oil of 1857 (private collection). Millais painted a further oil portrait of her in 1878, after her marriage to George Stibbard (collection of a descendant of the sitter).

As Millais had been one of the three principal members of the artistic movement known as Pre-Raphaelitism, in which – along with William Holman Hunt and Dante Gabriel Rossetti – he had attempted to lead the reform of English painting in favour of emotionally sincere and personal subjects, treated with intense colour and carefully observed natural detail, in the later 1850s and 1860s he remained a progressive and challenging artist. This was a period of extraordinary inventiveness and aesthetic sophistication, when painters and writers explored issues of how works of art might be understood – whether in a literal and documentary way or, as the artists of the Aesthetic movement preferred, subliminally and by subtle inflection of mood.

Thus Millais was one of the first of his generation to attempt to transcend pictorial narrative in favour of abstract and symbolical subjects. Works such as Autumn Leaves, in which the spectator is invited to meditate on the transience of human existence, are among his masterpieces. Swallow! Swallow!, notwithstanding its literary source, likewise explores a human drama in psychological terms. The sympathy that the painting expresses for the situation of one who is lovelorn, and who longs for contact with the person who adores her, is understood directly and through physiognomic expression and bodily gesture rather than as a dutiful retelling of a familiar legend, transposed to another medium.

Qualities of vibrant colour and painterly richness were identified when Swallow! Swallow! was first seen at the Royal Academy in 1865. The Art Journal’s verdict was that ‘the results are got by mastery, not minuteness’, dwelling also on the careful manipulation of tints: ‘The effect chiefly depends on a concord of colour, wherein blue pays a principal part, and then purple and black come in to complete the harmony’ (Art Journal, 1865, p.167). In 1886 Swallow! Swallow! appeared at the winter exhibition devoted to Millais’s work at the Grosvenor Gallery – an event that endorsed the painter’s position as one of the most admired and professionally successful artists of his generation. Finally, it was shown at the 1898 memorial exhibition of Millais’s paintings at the Royal Academy after his death in 1896. In 1899 the painting was bought by Mrs Stibbard, who as Alice Gray had been the model for the figure, and since then it has remained in the possession of her descendants.

A small watercolour version of the subject was in the collection of Robert Cecil (fig.5). This is reproduced in John Guille Millais, Life and Letters of Sir John Everett Millais, two volumes, London, 1899, I, p.369.

We are grateful to Dr Malcolm Warner for preparing this catalogue note. 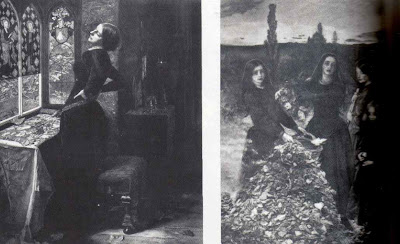 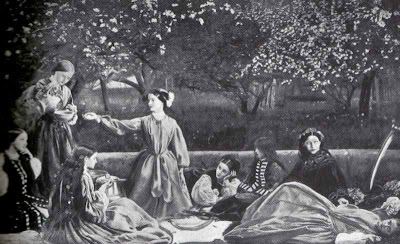 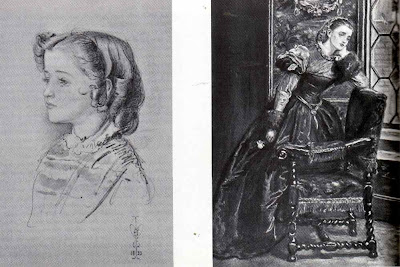 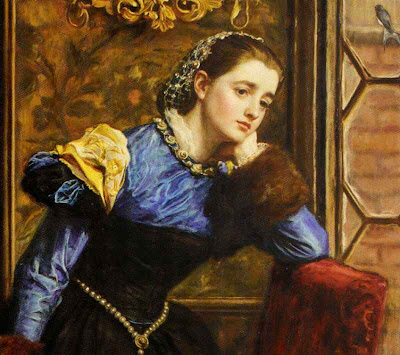