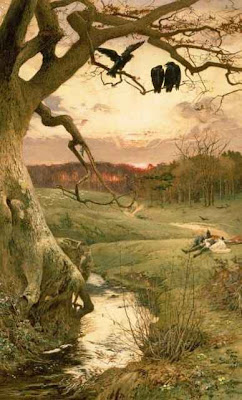 signed and dated l.r.: E. F. BREWTNALL/ 1885; inscribed with the title and the artist's address on a label attached to the backboard

watercolour heightened with bodycolour
39 by 24 in.
http://www.sothebys.com/app/live/lot/LotDetail.jsp?sale_number=L05133&live_lot_id=15

Edward Frederick Brewtnall's watercolours are fascinating examples of the endurance of Pre-Raphaelitism in the later nineteenth century. His wonderful attention to detail and to the truthful depiction of nature is evident in the present picture in which the gnarled trunk of the tree is depicted with great precision. Brewtnall was particularly interested in folk tales and ballads as stimulus for his highly romantic watercolours. Pictures inspired by fairy tales include a charming Little Red Riding Hood dated 1895 which was in the private collection of Lord Leverhulme (Sotheby's, 26-28 June 2001, lot 406) and The Frog Princess of 1880 (3 November 1993, lot 224). Brewtnall exhibited at various galleries, including the Royal Academy where he showed Cinderella in 1880 and "Where are you Going to. My Pretty Maid?" in 1881 and in 1883 he exhibited A Fairy Tale - And then the Fairy Godmother Waved her Wand at the Grosvenor Gallery.

The subject of the present watercolour comes from the English folk poem ‘The Three Ravens’. This was first recorded in Ravenscroft’s Melismata in 1611, and was later reprinted in Ritson’s Ancient English Songs. The Scottish version of the tale – ‘The Twa Corbies’ – appeared in Walter Scott’s Minstrelsy of the Scottish Border (1802). Francis James Child included ‘The Three Ravens’ in his English and Scottish Ballads, published in 1861, and it was presumably from this source that Brewtnall (along with a number of other English painters of the 1860s, 1870s and 1880s) was familiar with the legend. Child’s version of the poem is as follows:

The one of them said to his mate,
‘Where shall we our breakfast take?’-

‘Downe in yonder greene field,
There lies a knight slain under his shield.

‘His hounds they lie downe at his feete,
So well they their master keepe.

‘His haukes they flie so eagerly,
There’s no fowle dare him com nie.’

Downe there comes a fallow doe,
As great with yong as she might goe.

She lift up his bloudy hed,
And kist his wounds that were so red.

She got him up upon her backe,
And carried him to earthen lake.

She buried him before the prime,
She was dead herselfe ere even-song time.

God send every gentleman,
Such haukes, such houndes, and such a leman.
Posted by Hermes at 5:00 PM