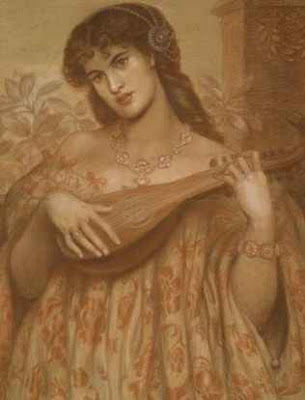 In addition to being a talented artist in his own right, Birchall was a familiar figure on the contemporary art scene, attending dinners and private views at the Royal Academy, Dudley and Grosvenor Galleries, and commissioning designs for stained glass windows from Edward Burne-Jones and decorative designs from Walter Crane. Other painters and draughtsman who were friends of his and who he describes meeting in diary entries were John Everett Millais, Richard Doyle and Frank Dicksee. A further link between Birchall and Rossetti was the Aesthetic designer John Aldam Heaton, who had been a childhood friend of the former's in Leeds and who had been commissioned to paint the interiors at Bowden Hall. Rossetti had known Heaton at least since 1861, when he had stayed with him and his wife Ellen Mary to paint her portrait (Regina Cordium: Mrs Aldam Heaton, ex Forbes Magazine Collection, New York), and from this time forward Heaton became a correspondent of Rossetti's, and one with whom he engaged in business transactions to do with placing works of his with collectors. Whether the idea of acquiring a drawing by Rossetti to place in conjunction with the collection of ceramics at that time by devised by Heaton was Birchall's own or one recommended to him, it was most fortuitous. Rossetti was himself one of the pioneering enthusiasts for blue and white china and had amassed a rich collection of his own in the 1860s in his house in Cheyne Walk in Chelsea. The late 1860s, and specifically the year 1869 was not an easy time for Rossetti, with a variety of anxieties besetting him. His health was beginning to break down, with particular worries about his eyesight and he was suffering from chronic insomnia. In addition, he had financial problems, exacerbated by debts connected with outstanding commissions and monies previously received on account. Old friendships came under pressure, with a notable falling out with Frederick Sandys, and he was himself increasingly isolated, especially so during Jane Morris's long absence at Bad Ems in Germany, to which place she went in the latter part of 1869 for the sake of her health. Rossetti devoted much of his time to poetry, and particularly after the retrieval of the manuscript of his early poems from the coffin in which his wife Lizzie had been buried in 1862 he was occupied with the revision and preparation for publication of his verse. La Mandolinata - made as has been seen that same summer - may be regarded as especially interesting as coming from a period of turmoil and distress in Rossetti's artistic and personal life when he produced very few other works of art.J. D. Birchall lent La Mandolinata to the memorial exhibition of Rossetti's works at the Burlington Fine Arts Club in 1883, presumably having been asked to do so by the artist's brother William Michael Rossetti. In 1889 it was included in the checklist published by W. M. Rossetti as an appendix to his Dante Gabriel Rossetti as Designer and Writer, and then ten years later it was likewise published by J. C. Marillier. Birchall died in 1897, by the drawing remained at Bowden Hall for another twenty-nine years, appearing in the various inventories of the house contents and finally being sold in 1926. in 1928 it appeared at Christie's in London, probably being bought on that occasion by the antiquarian booksellers Spencer and Co, and from whom ten years later it was purchased by the distinguished American academic Dr A. Joseph Armstrong (whose descendants own it to this day). The drawing therefore has an interesting provenance with only one brief period when its whereabouts are unknown. Dr Armstrong (1912-1954) was professor of English literature at Baylor University, Waco, Texas. He was renowned as an authority on Robert and Elizabeth Barrett Browning, and was a keen collector of all material relating to the Brownings (his collection formed the basis of the Armstrong Browning Library Collection of Browningiana at Baylor University. He was presumably in search of Browning material when he visited Spencer's premises in 1938, on which occasion the opportunity occurred to purchase La Mandolinata. He may have felt less confident of judging the merits of a drawing by Rossetti than in his more familiar field of literary manuscripts, and therefore sought corroboration of the attribution. In 1963 Dr Armstrong's widow, Mary Maxwell Armstrong explained in a letter to Virginia Surtees how her husband had 'bought this painting [sic] many years ago from a London dealer, and how to 'allay our fears as to its authenticity [the dealer Spencer] permitted my husband to take the picture in a taxi to the home of two nieces of Rossetti, then living in London. Dr Armstrong did so, [and] found the two ageing nieces who welcomed him warmly'. In her book Pre-Raphaelite Twilight - The Story of Charles Augustus Howell (1954) Helen Rossetti Angeli, herself one of the two nieces visited by Armstrong, described how 'some examples of the kind [i.e. spurious drawings purported to be by Rossetti] were offered for sale to an American - no connoisseur of painting - by a reputable bookshop and art dealer in 1938. Of his lot one alone appeared to be a genuine with a traceable history - a crayon drawing very desirable to possess'. This was La Mandolinata, and thus the attribution to Rossetti was endorsed and the purchase of the drawing carried forward. Although recorded in the early Rossetti literature, La Mandolinata has remained very little known since the time of its acquisition by Dr Armstrong, and in that time has never been shown in an exhibition of Rossetti's works.
Sotheby's
Posted by Hermes at 6:00 AM