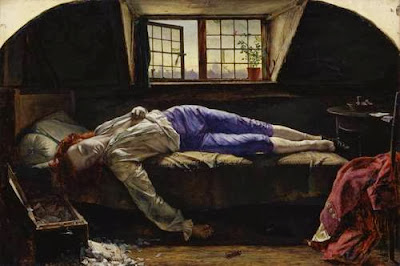 Chatterton is Wallis’s earliest and most famous work. The picture created a sensation when it was first exhibited at the Royal Academy in 1856, accompanied by the following quotation from Marlowe:

Cut is the branch that might have grown full straight

And burned is Apollo’s laurel bough.
Ruskin described the work in his Academy Notes as ‘faultless and wonderful’.
Thomas Chatterton (1752-70) was an 18th Century poet, a Romantic figure whose melancholy temperament and early suicide captured the imagination of numerous artists and writers. He is best known for a collection of poems, written in the name of Thomas Rowley, a 15th Century monk, which he copied onto parchment and passed off as mediaeval manuscripts. Having abandoned his first job working in a scrivener’s office he struggled to earn a living as a poet. In June 1770 he moved to an attic room at 39 Brooke Street, where he lived on the verge of starvation until, in August of that year, at the age of only seventeen, he poisoned himself with arsenic. Condemned in his lifetime as a forger by influential figures such as the writer Horace Walpole (1717-97), he was later elevated to the status of tragic hero by the French poet Alfred de Vigny (1797-1863).
Wallis may have intended the picture as a criticism of society’s treatment of artists, since his next picture of note, The Stonebreaker (1858, Birmingham City Museum and Art Gallery), is one of the most forceful examples of social realism in Pre-Raphaelite art. The painting alludes to the idea of the artist as a martyr of society through the Christ-like pose and the torn sheets of poetry on the floor. The pale light of dawn shines through the casement window, illuminating the poet’s serene features and livid flesh. The harsh lighting, vibrant colours and lifeless hand and arm increase the emotional impact of the scene. A phial of poison on the floor indicates the method of suicide. Following the Pre-Raphaelite credo of truth to nature, Wallis has attempted to recreate the same attic room in Gray’s Inn where Chatterton had killed himself. The model for the figure was the novelist George Meredith (1828-1909), then aged about 28. Two years later Wallis eloped with Meredith’s wife, a daughter of the novelist Thomas Love Peacock (1785-1866).
http://www.tate.org.uk/art/artworks/wallis-chatterton-n01685/text-summary
Posted by Hermes at 8:16 AM