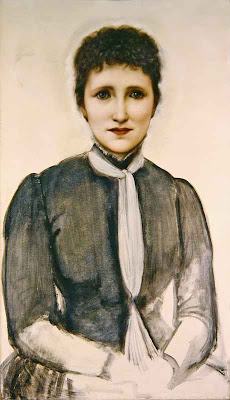 Oil on canvas
31 x 18 1/2 inches, 79 x 47 cm.
"Helen Mary Gaskell, born in 1859, was the daughter of Canon Melville of Worcester, and the wife of Captain Gaskell of the 9th Lancers who had visited the Middle East with Holman Hunt. Frances Horner introduced her to Burne-jones in 1892. She became an important confidante of the artist. Her correspondence with Burne-jones is in the British Museum and her collection of drawings in the Ashmolean Museum, Oxford " (Waters, 44-45).
Waters, Bill. Burne-Jones -- A Quest for Love: Works by Sir Edward Burne-Jones Bt and Related Works by Contemporary Artists. London: Peter Nahum, 1993. Catalogue number 32.
Posted by Hermes at 6:00 AM