Simeon Solomon - Sappho and Erinna in the garden Mytelene 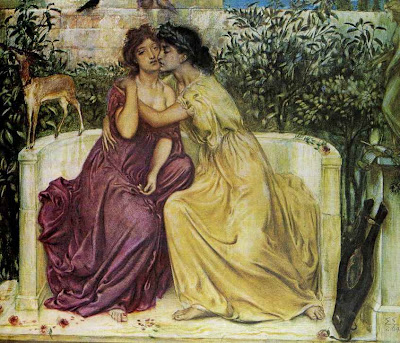 Simeon Solomon was known affectionately as the darling of the Pre-Raphaelites, until his tragic rejection from polite society following his arrest in February 1873, aged 32, in a public lavatory in London. His charge with indecent exposure (and 'attempting to commit buggery') received a £100 fine and ruined his career.
http://www.studio-international.co.uk/painting/love_revealed.asp
and this picture may well be a comment on his own situation.
Posted by Hermes at 6:00 AM