William Morris - The Haystack in the Floods 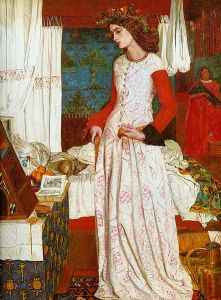 HAD she come all the way for this,
To part at last without a kiss?
Yea, had she borne the dirt and rain
That her own eyes might see him slain
Beside the haystack in the floods?
Along the dripping leafless woods,
The stirrup touching either shoe,
She rode astride as troopers do;
With kirtle kilted to her knee,
To which the mud splash'd wretchedly;
And the wet dripp'd from every tree
Upon her head and heavy hair,
And on her eyelids broad and fair;
The tears and rain ran down her face.


By fits and starts they rode apace,
And very often was his place
Far off from her; he had to ride
Ahead, to see what might betide
When the roads cross'd; and sometimes, when
There rose a murmuring from his men, 20
Had to turn back with promises;
Ah me! she had but little ease;
And often for pure doubt and dread
She sobb'd, made giddy in the head
By the swift riding; while, for cold,
Her slender fingers scarce could hold
The wet reins; yea, and scarcely, too,
She felt the foot within her shoe
Against the stirrup : all for this,
To part at last without a kiss 30
Beside the haystack in the floods.


For when they near'd that old soak'd hay,
They saw across the only way
That Judas, Godmar, and the three.
Red running lions dismally
Grinn'd from his pennon, under which,
In one straight line along the ditch,
They counted thirty heads.

So then,
While Robert turn'd round to his men,
She saw at once the wretched'end,
And, stooping down, tried hard to rend
Her coif the wrong way from her head,
And hid her eyes; while Robert said :
'Nay, love, 'tis scarcely two to one,
At Poictiers where we made them run
So fast — why, sweet my love, good cheer,
The Gascon frontier is so near,
Nought after this,'


But, 'O,' she said,
'My God! my God! I have to tread
The long way back without you; then 50
The court at Paris; those six men;
The gratings of the Chatelet;
The swift Seine on some rainy day
Like this, and people standing by,
And laughing, while my weak hands try
To recollect how strong men swim.
All this, or else a life with him,
For which I should be damned at last,
Would God that this next hour were past!'


He answer'd not, but cried his cry, 60
'St. George for Marny!' cheerily;
And laid his hand upon her rein.
Alas! no man of all his train
Gave back that cheery cry again;
And, while for rage his thumb beat fast
Upon his sword-hilts, some one cast
About his neck a kerchief long,
And bound him.


Then they went along
To Godmar; who said: 'Now, Jehane,
Your lover's life is on the wane 70
So fast, that, if this very hour
You yield not as my paramour,
He will not see the rain leave off —
Nay, keep your tongue from gibe and scoff,
Sir Robert, or I slay you now.'
She laid her hand upon her brow,
Then gazed upon the palm, as though
She thought her forehead bled, and — 'No.'
She said, and turn'd her head away,
As there were nothing else to say, 80
And everything were settled: red
Grew Godmar's face from chin to head:
'Jehane, on yonder hill there stands
My castle, guarding well my lands :
What hinders me from taking you,
And doing that I list to do
To your fair wilful body, while
Your knight lies dead?'

A wicked smile
Wrinkled her face, her lips grew thin,
A long way out she thrust her chin: 90
'You know that I should strangle you
While you were sleeping; or bite through
Your throat, by God's help — ah!' she said,
'Lord Jesus, pity your poor maid!
For in such wise they hem me in,
I cannot choose but sin and sin,
Whatever happens : yet I think
They could not make me eat or drink,
And so should I just reach my rest.'
'Nay, if you do not my behest, 100
O Jehane! though I love you well,'
Said Godmar, 'would I fail to tell
All that I know.' 'Foul lies,' she said.
'Eh? lies my Jehane? by God's head,
At Paris folks would deem them true!
Do you know, Jehane, they cry for you,
"Jehane the brown! Jehane the brown!
Give us Jehane to bum or drown!" —
Eh — gag me Robert! — sweet my friend,
This were indeed a piteous end > 100
For those long fingers, and long feet,
And long neck, and smooth shoulders sweet;
An end that few men would forget
That saw it — So, an hour yet:
Consider, Jehane, which to take
Of life or death!'

So, scarce awake,
Dismounting, did she leave that place,
And totter some yards : with her face
Turn'd upward to the sky she lay,
Her head on a wet heap of hay, > 120
And fell asleep: and while she slept,
And did not dream, the minutes crept
Round to the twelve again; but she,
Being waked at last, sigh'd quietly,
And strangely childlike came, and said:
'I will not.' Straightway Godmar's head,
As though it hung on strong wires, turn'd
Most sharply round, and his face burn'd.

For Robert — both his eyes were dry,
He could not weep, but gloomily > 130
He seem'd to watch the rain; yea, too,
His lips were firm; he tried once more
To touch her lips; she reach'd out, sore
And vain desire so tortured them,
The poor grey lips, and now the hem
Of his sleeve brush'd them.

With a start
Up Godmar rose, thrust them apart;
From Robert's throat he loosed the bands
Of silk and mail; with empty hands
Held out, she stood and gazed, and saw, > 140
The long bright blade without a flaw
Glide out from Godmar's sheath, his hand
In Robert's hair; she saw him bend
Back Robert's head; she saw him send
The thin steel down; the blow told well,
Right backward the knight Robert fell,
And moan'd as dogs do, being half dead,
Unwitting, as I deem : so then
Godmar turn'd grinning to his men,
Who ran, some five or six, and beat
150
His head to pieces at their feet.

Then Godmar turn'd again and said:
'So, Jehane, the first fitte is read!
Take note, my lady, that your way
Lies backward to the Chatelet!'
She shook her head and gazed awhile
At her cold hands with a rueful smile,
As though this thing had made her mad.

This was the parting that they had
Beside the haystack in the floods. 160


Morris, William. The Defence of Guenevere, The Life and Death of Jason, and Other Poems.

His first volume, The Defence of Guenevere and Other Poems (1858), was the first book of Pre-Raphaelite poetry to be published. The dark poems, set in a sombre world of violence, were coolly received by the critics, and he was discouraged from publishing more for a number of years. "The Haystack in the Floods", one of the poems in that collection, is probably now one of his better-known poems. It is a grimly realistic piece set during the Hundred Years War in which the doomed lovers Jehane and Robert have a last parting in a convincingly portrayed rain-swept countryside.
Posted by Hermes at 6:54 PM

The poem seems more powerful than the picture but I don't know enough about the poem to understand properly what's going on so I come away with the disconcerting atmosphere hanging over me but not with the story. I can't think of another poem where rain is used like this and that surprises me because the rain makes the whole episode much more realistic and believable than if such a gruesome-gothic story were being told without it.

Thanks Lucy. I thought it very sad and reminded me of a folk song in its imagery and sense of loss. Morris was a really complicated character.

A marvellous and evocative poem. One aspect I have not seen commented on. Godmar's speech would indicate that Jehane was suspected of witchcraft-hence the cries of the Paris mob.