Edward Burne-Jones - The Tree of Jesse 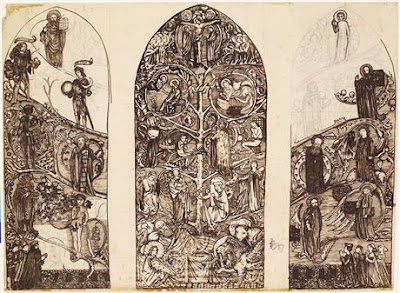 This is a stained glass design for the east window of Waltham Abbey executed by James Powell & Sons in 1861. A version of the central panel was exhibited in the International Exhibition in 1862, and is now also in Birmingham's collection (1977M1).Each figure is identified by the artist. The left window, from bottom to top are: Adam (holding fruit, with serpent to his left), Noah (holding a small ark; name spelled 'Noea' or 'Noeh'); Jacob (holding a ladder); Gideon (holding fleece); Joshua (in armour holding the sun and moon); Samson (with flowing tresses); and Moses (unlabelled by the artist, but holding the 2 stone tablets of the Ten Commandments). Middle window, with the actual Tree of Jesse features (from bottom to top): the four animorphic symbols of the Evangelists with scrolls around them quoting the first lines of their respective Gospels (the man's scroll, St. Matthew, reads 'Generations of Jesus Christ of the book of'; above him is the eagle of St. John, whose Gospel begins 'In the beginning was the Word'; opposite is the ox of St. Luke, with 'There was in the days of Herod'; the lion is St. Mark, with 'The beginning of the Gospel of Jesus Christ.). These creatures flank the sleeping body of Jesse, from which the tree springs. The first branch holds (from left to right): Achaz (kneeling in front of an altar with a statue); Solomon (holding the Temple); David (playing a lyre); Roboam (or Roboham, stringing a bow). The next branch supports: Hezekiah (the king, holding a sundial [?]; Manassas (inprisoned and in chains); Josias (the king, holding tablets [?]; Jecunias (bound and chained). The third branch shows two roundels recounting the birth of Christ, with the Nativity scene on the left and the adoration of the shepherds on the right. At the top of the tree is Jesus crucified to it, with his mother and Mary Magdalene flanking it, in mourning. The right panel is incomplete, and features the ancient Hebrew prophets with symbols associated with them, they are (from bottom to top): Esaias (or Isaiah); Jeremias (Jeremiah); Ezekiel (with the eyes of the seraphim in wheels behind him); Daniel (with a lion sleeping at his feet); Malachai and a rough sketch in pencil of Micah that is unfinished. A t the very top is John the Baptist, outlined in pen.
Posted by Hermes at 5:00 PM