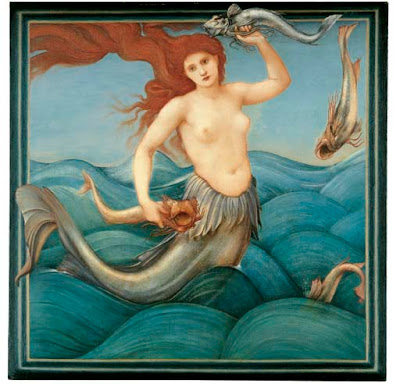 There can be few scholars working on an artist who do not have a mental list of pictures by their subject of research that are recorded but lost. Some they will know are beyond recovery, having been destroyed by enemy action or act of God, but there will be others for which no such information exists and the tantalising possibility remains that they may turn up. Such works represent a perpetual challenge to the art-historian concerned. Ultimately, of course, he wants to find them, but this he knows he may never achieve. Meanwhile there is a more pressing obligation: to use his existing knowledge to visualise the missing works and gauge what bearing they may have on received perceptions of the master's career and development. An old description, engraving or photograph, while obviously helpful, will only partially fill the gap.

Burne-Jones is no exception to this rule. His work is documented in remarkable detail, beginning with the year-by-year record that he kept himself. Now in the Fitzwilliam Museum, Cambridge, the account has certain limitations. Since he only began it in 1872, the entries for the years prior to this date are based on memory and sometimes inaccurate. Even from the time when the record becomes contemporary, the jottings are often too cryptic to give a full picture of what is afoot. Only by reading between the lines, for instance, can we piece together the complex development of the famous Briar Rose paintings (Buscot Park, Oxfordshire) and their subsidiary versions.

Nonetheless the record is invaluable, nor is it by any means our only resource.The two early monographs by Malcolm Bell (four editions 1892-8) and Fortunée De Lisle (1904) contain further lists, Bell's clearly being based on Burne-Jones's own record, to which he must have had access, (Bell was a nephew of Edward Poynter, who was Burne-Jones's brother-in-law, their wives being sisters). Lady Burne-Jones's Memorials of her husband (1904) is another essential source of information, even if this too sometimes needs decoding. Then there are the catalogues of the artist's lifetime retrospective exhibition at the New Gallery in 1892-3 and the two memorial shows of 1889-9, the main one again at the New Gallery, and a smaller one, focusing on drawings and studies, at the Burlington Fine Arts Club. As for other books and articles, Professor Fredeman's 'bibliocritical study' of the Pre-Raphaelite movement (1965) lists well over 100 items specifically related to Burne-Jones, the majority dating either from the artist's lifetime or the years before he fell out of favour in the early twentieth century. Many, including Julia Cartwright's account of his life and work and Aymer Vallance's important essay on his decorative art, published by the Art Journal respectively in 1894 and 1900, are lavishly illustrated.

There was, then, no shortage of information when Burne-Jones once again attracted attention as part of the general revival of interest in Victorian arts (a phenomenon usually dated to the 1960s, although green shoots had begun to push their way up long before then). The main problem was rather to trace and identify the pictures. Many, of course, were safely lodged in museums, even if they had been consigned to storerooms during the long years of eclipse; others remained in private hands or were coming onto the market as renewed interest drove prices up. Whatever the case, it was not long before most things were located and a fairly comprehensive picture of the artist's oeuvre emerged.

Even today, however, over thirty years after the Burne-Jones revival had found its first major expression in Martin Harrison's and Bill Waters' 1973 monograph (a book which, significantly, includes a gazeteer of relevant public collections), certain desiderata compromise that picture in one form or another. Some fall into the already mentioned category of irrevocable losses. The outstanding case is the pictures once belonging to the architect George Edmund Street, who had known Burne-Jones from very early days. Having descended in Street's family, they were destroyed when bombs fell on Bath in 1941. Among them were such important items as The Waxen Image, an elaborate pen-and-ink drawing of 1856, illustrating a scene of witchcraft, and St Theophilus and the Angel, a watercolour exhibited in 1867. The Waxen Image was the first work that Burne-Jones would acknowledge as belonging to his canon. Executed soon after his meeting with Dante Gabriel Rossetti in January 1856 and inspired by his hero's poem 'Sister Helen', it would have told us much about his initial response to the man who exercised such a crucial influence on his early development. St Theophilus also represented a decisive moment in Burne-Jones's career, being painted with Ruskin at his elbow to embody the critic's ideal of 'constant art', a concept that went far to define the aesthetic of his later style. At least St Theophilus is known from an old photograph, but the only record of The Waxen Image is a description in the catalogue of the 1899 exhibition at the Burlington Fine Arts Club.

If these works have gone forever, leaving us to cut our critical cloth accordingly, others belong to our second category: pictures for which no evidence of destruction exists and the strong or remote possibility remains that they may re-surface. Until its recent discovery in a private collection, A Sea-Nymph was among the most important of these provokingly elusive items.

The picture was by no means unknown. It is mentioned in Burne-Jones's own work-record, and although it was not exhibited at the Grosvenor Gallery following its execution in 1880-1, it was included in his retrospective at the New Gallery twelve years later. Its appearance was also familiar since it was photographed by Frederick Hollyer, the Kensington photographer who had the monopoly for reproducing Burne-Jones's work. His images were syndicated widely, and A Sea-Nymph was illustrated on several occasions, for example in Julia Cartwright's Art Annual of 1894 and in Otto von Schleinitz's book on Burne-Jones in the Künstler-Monographien series (1901), the principal contemporary account of the artist's work in German. Last but not least, the picture had an interesting stylistic and historical context defined by a group of associated drawings and designs.

All this only made it more frustrating that the picture itself was missing. It was evident that it was not only a good-sized oil painting dating from the very height of Burne-Jones's career but a work of startling originality and boldness of conception speaking volumes about the impact of his decorative work on his painting. Further increasing the sense of loss was the fact that the picture was one of a pair, having a companion, A Wood-Nymph, that was exactly contemporary, identical in scale, and comparable in design. They had been together until March 1908, when they appeared in the William Connal sale at Christie's, but, finding separate buyers, had then been split up. A Sea-Nymph, it now emerges, was bought by a dealer who was probably acting for a sister of Connal's, in whose family it has descended. A Wood-Nymph was acquired by another dealer and, having passed through the hands of two collectors, found its way into the South African Museum, Cape Town, in 1944.

Had the whereabouts of both pictures been known, an attempt would almost certainly have been made to bring them together either for the Arts Council's Burne-Jones Exhibition in 1975, another early milestone in re-assessment, or for the centenary exhibition that was mounted by the Metropolitan Museum, New York, in 1998, and subsequently seen in Birmingham, Burne-Jones's birthplace, and Paris, the city where he had enjoyed such a vogue during the Symbolist era. The nearest anyone came to achieving this marriage was in 1987, when A Wood-Nymph was included in Burne-Jones and his Followers, an exhibition circulated in Japan by the Tokyo Shimbun, and A Sea-Nymph was illustrated (from the old Hollyer photograph) in the catalogue.

However, the re-discovery of the Sea-Nymph inspired Christie's to mount a small exhibition at their King Street premises in March 2005, in which the picture was briefly reunited with its companion in South Africa. Borrowing its title, Daughters of Delight, from Spencer's Epithalamion ('Bring with you all the Nymphes ... daughters of delight'), the exhibition not only put the two pictures side by side for the first time in nearly a hundred years but set them in the context of a group of related works, kindly lent at very short notice by museums and private collectors. Miraculously, both pictures were still in their matching original frames, making the sense of kinship all the more complete.

The exhibition had a fully-illustrated catalogue, which has been adapted for the present sale-catalogue entry. Not only have the entries for the other exhibits been dropped but, in accordance with Christie's usual practice, we have omitted the footnotes which gave the references for quotations and other subsidiary data. For all this, the exhibition catalogue should be consulted. At the same time, one or two facts which emerged during the exhibition have been incorporated in the present entry. In particular, it is now clear that the drawing of a mermaid and her babies in the Fitzwilliam Museum is one of two that Burne-Jones made to be traced into William Morris's fabric design of 1875, rather than being some indeterminate later version as we originally supposed.