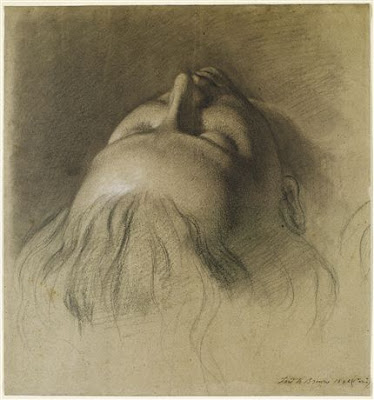 This is one of three studies in the Birmingham collection for the painting 'Parisina's Sleep' (now lost). They were made in 1842 when Brown was living in Paris. The picture was based on a poem of the same name by Byron which tells the tale of Prince Azo who executed his wife, Parisina, after discovering her adulterous affair with his illegitimate son, Hugo. The scene Brown chose to depict is the one in which Prince Azo first hears Parisina talk of Hugo in her sleep. In his rage he contemplates murdering her. The painting was rejected from the Paris Salon ion 1843 but it was exhibited at the British Institution two years later where it received some admiration. This study is for the head of Parisina. Although Brown studied in Belgium and lived in Paris he insisted in his 1865 one-man exhibition that the painting was inspired by the works of the Spanish masters and Rembrandt which he saw on numerous visits to the Louvre (Ford Madox Brown, 'The Exhibition of Work and other Paintings,' 1865, p. 17). This study gives a glimpse of these influences in the touches of white chalk adding dramatic lighting to the scene. LM
http://www.preraphaelites.org/the-collection/1906P717/parisinas-sleep-study-for-head-of-parisina/
Posted by Hermes at 1:00 PM