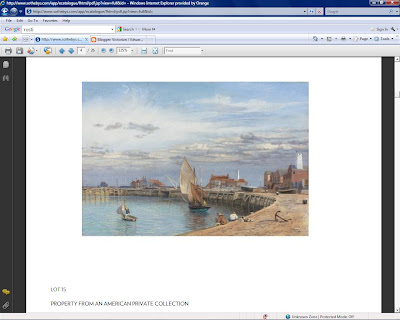 John Brett: A Pre-Raphaelite on the Shores of Wales, exhibition catalogue for the National Museum and Gallery, Cardiff, 2001, p.22;


Brett is known to have visited the Norfolk fishing town of Yarmouth in August 1868 and it appears that he remained there until the following spring. Another view of the harbour entitled Trawling Smacks at Yarmouth is dated 1869 (British Museum) and was submitted to the Royal Academy with the present picture, Trawling Smacks at Yarmouth being refused by the Selection Committee whilst Entrance to Yarmouth Harbour was accepted. This picture; 'shows a timeless scene of a fishing boat setting sail within the harbour at Yarmouth. The background consists of a
miscellaneous but eminently naturalistic assortment of boats, a derrick for lifting loads of fish from the holds, and warehouses in which the catches would be sorted and sold, each complete with a wooden-built watch-tower from which the fleet might be observed.' (Christopher Newall, Victorian Watercolours, 1987, p.76)
Posted by Hermes at 6:00 AM