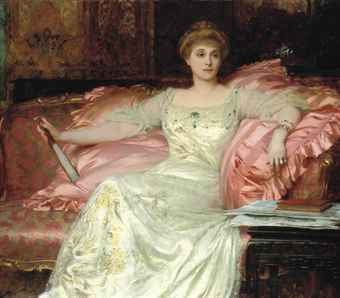 Frank Dicksee belonged to that unfortunate generation of late Victorian artists who found themselves marooned in mid-career. Making their names as painters of literary or historical subject pictures, they were suddenly faced around the turn of the century with the uncomfortable fact that such works were no longer in vogue. Even Burne-Jones, the greatest exponent of literary subject matter, suffered the humiliation of seeing Love Leading the Pilgrim (Tate Britain), his last major exhibited picture, return from the New Gallery unsold in 1897, nor was he under any illusion that, as he put it, 'the rage for me is over'. However, he died the following year, so the question of diversifying, even if he had been willing to entertain it, did not arise.

Younger men could not evade the issue, and portraiture was their great resource. J.W. Waterhouse, Dicksee's senior by four years, painted many portraits in later life, mainly of young women happy to see themselves immortalised as etheral neo-Pre-Raphaelite maidens. Dicksee, too, had a style that was readily adaptable, his lush, upholstered idiom being perfectly tailored to the depiction of upper-crust Edwardian womanhood in all her handsome and corsetted glory. It is fascinating to analyse a list of his Royal Academy exhibits. Between 1876, when he made his debut, and 1898, he showed nothing but subject pictures except one double portrait with a strong narrative element and a few landscapes. From 1899 until his death in 1928 he exhibitied no fewer than sixty-seven portraits and only a handful of subject pictures, often with titles that suggest they were little more than fanciful likenesses of pretty models of the kind that Lord Leighton had exhibited in Dicksee's youth. Dicksee's sitters did not exclude men; indeed he was quite sought after in military circles during and shortly after the Great War. He also found himself painting the daughters of several of his artist friends, Hedley Fitton, Sutton Palmer and others. But the overwhelming impression given by the list is that he had built up an extensive, and no doubt lucrative, practice painting the womenfolk of the aristocracy and nouveaux riches.

Press comment at the time he showed the present example in 1902 highlights the dilemma that an artist like Dicksee faced at this period. 'A portrait', the art critic on the Times observed, 'is often the only kind of picture for which an artist is at all certain to be paid'; and to show how true this was Dicksee's other exhibit that year, a distinctly overblown Belle Dame sans Merci, was savaged. The same critic moaned that it was 'decorative but not very Keatsian', and this view was echoed in the Academy, which called it a 'theatrical illustration of a poem that cries aloud against pictorial treatment of this kind'. The Athenaeum found the picture 'trying', while the Spectator dismissed it as 'fashionable rubbish'.

The subject of our portrait was the second wife of William Knox D'Arcy (1849-1917) of Stanmore Hall, near Harrow. D'Arcy is known to students of late Victorian art as the man who commissioned the Holy Grail tapestries from William Morris and Edward Burne-Jones, thus financing one of the supreme achievements of the Arts and Crafts movement, but there was much more to him than that. Born at Newton Abbot in Devonshire, the son of a solicitor, and educated at Westminster School, D'Arcy had left England in 1866 at the age of seventeen. His family had decided to emigrate to Australia, and when his father set up a practice in Rockhampton, Queensland, young William joined the firm. Through professional contacts, he was soon speculating in land and goldmining, joining a syndicate to develop Ironstone Mountain (later re-named Mount Morgan) in 1882. By 1886 he was a director and major shareholder of the Mount Morgan Gold Mining Company, and three years later he returned to England, a multi-millionaire.

Nor was this by any means the end of D'Arcy's entrepreneurial career. In 1900 he agreed to fund a search for oil and minerals in Persia. Drilling began in 1903, and for some years the results were disappointing. D'Arcy had to find increasingly large sums of money to cover costs, and by 1908 he was close to bankruptcy. On 26 May that year, however, the excavators finally struck oil, and in April 1909 the Anglo-Persian Oil Company was formed, with D'Arcy as a director. Having made and nearly lost one fortune, he was on the brink of making another. Ultimately the Anglo-Persian Oil Company would become British Petroleum, and D'Arcy may be regarded as the founder of the modern oil industry in the Middle East.

On his return to England in 1889, D'Arcy brought with him a wife, Elena, a Rockhampton girl he had married in 1872, together with their five children, two sons and three daughters. He was determined to enjoy his wealth and live life in the fast lane. He had soon acquired not only a substantial London house, 42 Grosvenor Square, but Stanmore Hall as a country retreat within easy reach of the metropolis and an estate in Norfolk, Bylaugh Park, for the shooting. The D'Arcys entertained lavishly; Melba and Caruso were among the stars who performed at their private concerts, and they had their own enclosure on Epsom racecourse.

Stanmore is the house for which D'Arcy is remembered today. A neo-gothic pile of 1847 by J.M. Derick, it was remodelled for its new owner by the Ipswich architect Brightwen Binyou, while Morris & Co. were commissioned to furnish it throughout. Morris himself, disdainful of such a thoroughgoing capitalist as D'Arcy, took little interest in the scheme except for working closely with Burne-Jones to produce the Holy Grail tapestries, which hung in the dining-room and were eventually completed in 1894. Whether the two old friends were aware of the irony of a patron like D'Arcy enabling them to realise their Arthurian visions, we do not hear, but it can hardly have escaped them. The rest of the work was overseen by Morris's chief assistant, John Henry Dearle, although other members of the Arts and Crafts fraternity were closely involved. Much of the furniture was by George Jack, chimneypieces and many decorative details were designed by W.R. Lethaby, and stained glass was contributed by Louis Davis.

Elena D'Arcy died in 1897, and two years later D'Arcy re-married. His second wife, the subject of our portrait, was another Australian. Nina Bourcicault was the daughter of A.L. Bourcicault, the proprietor of the Rockhampton Argus, and the sister of Mary Bourcicault, a singer. Nina is also described in the records as Mrs Ernestine Nutting, which presumably means that she, like D'Arcy, had lost her spouse. D'Arcy must have known her during his years in Rockhampton. Both families had belonged to the town's professional elite, and, perhaps equally significantly, were of Irish descent. While we can only infer this of the Bourcicaults on account of their name, we know that the D'Arcys were an old Irish family, William's father, the solicitor, being the first of the clan to settle in England. It is even tempting to wonder if there had been some romantic connection between William D'Arcy and Miss Bourcicault, a connection which circumstances now allowed them to fulfil in marriage. At all events, left wifeless in mid-career, D'Arcy seems to have invited the widowed Mrs Nutting to join him.

When Dicksee painted Nina in 1902, five years into the marriage, D'Arcy was still enjoying his first fortune. Indeed, Dicksee was clearly at pains to create an image that did justice to the couple's wealth. His sitter's discreetly opulent dress of white embroidered silk sewn with emeralds, the rococo sofa and pink satin cushions on which she reclines, the hints of old silver and lacquered furniture behind her, and above all her aloof and mildly disdainful expression - all leave us in no doubt that here is someone in command of a very nice income and for whom servants come running. Perhaps the portrait was painted just in time. It was still only two years since D'Arcy had agreed to fund the search for oil in Persia, and the difficulties that beset the quest had as yet hardly emerged. But they were soon to be a source of great anxiety, and with an overdraft at the bank D'Arcy might well have thought twice about employing the fashionable, and probably expensive, Mr Dicksee to paint his wife.

On D'Arcy's death in 1917, his widow left Stanmore and many of its contents were sold. By far the most important, the Holy Grail tapestries, were bought in 1920 by the Duke of Westminster to adorn another neo-gothic mansion, Alfred Waterhouse's Eaton Hall, near Chester. Nina took a house in Tilney Street, Mayfair, just beside Dorchester House, which was soon to be demolished and rise again as the Dorchester Hotel in 1931. Here she continued to live in style. A footman stood behind every chair at the dinner table, and Queen Mary herself was in the habit of dropping in for tea.