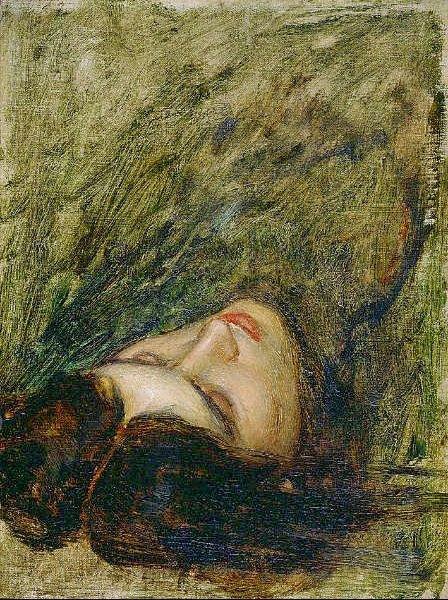 Oil on board
This symbolist work is a study for the head of Orpheus in Nymphs Finding the Head of Orpheus (1900), which was exhibited at the Royal Academy in 1901 and 1922. The atmosphere in the finished painting is both tranquil and one “of wonder”.(1)
The time and thought devoted to it are attested not only by the preliminary pencil and oil sketches showing significant differences in composition, but by a full-scale study of the floating head, comparable in treatment to the finished work.(2)
Mr J. W. Waterhouse stands mid-way between Burne-Jones and Leighton; his aim is not so much to reconstruct, with truth of local details, the legendary past, as to re-tell the stories, pictorially, in a fashion of his own. There is more of dream than of conscious thought, probably, in Mr Waterhouse's Head of Orpheus, red hair twined round the lyre, as it floats in a rock-set pool of the Hebrus, watched by two sad-eyed nymphs.(3)
1. R. de la Sizeranne, The Art Journal, 1901, page 165
2. Anthony Hobson, The Art and Life of J. W. Waterhouse RA 1849-1917, Studio Vista/Christies 1980
3. R. de la Sizeranne, The Art Journal, 1901