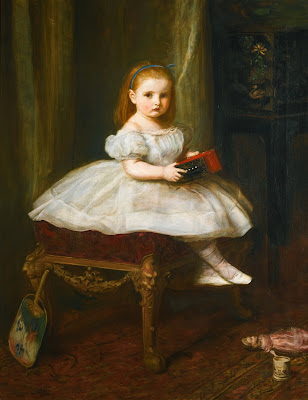 ‘I shd like to get on somewhat with Little Davison as children of that age grow so rapidly’ (Letter from Millais to his wife Effie, 9 August 1865, Millais Papers, Pierpont Morgan Library, New York)
A record of Millais’ account at Coutts bank shows a payment from J. Davison of 600 guineas on 8 February 1866 which was almost certainly for the present portrait and a considerable sum of money. This was probably made by James William Davison (1813-1885) a well-connected music critic for the Times, Graphic and Saturday Review. Davison was a great friend of many musical luminaries, including Mendelssohn and Berlioz and his wife Arabella (nee Goddard) was a noted pianist - hence the inclusion of the accordion in Millais' portrait of their daughter.
The portrait predates Millais' famous depictions of infancy, Cherry Ripe of 1879 (sold in these rooms, 1 July 2004, lot 21), Bubbles of 1886 (Unilever) and The Little Speedwell's Darling Blue of 1891 (Lady Lever Art Gallery, Port Sunlight). However, he had already established a reputation as a painter of children, whose perception and understanding of his sitters was both sympathetic and intuitive. Pictures such as The Woodman's Daughter of 1850 (Guildhall Art Gallery, City of London), The Return of the Dove to the Ark of 1851 (Ashmolean Museum, Oxford), L'enfant du Regiment of 1854 (Yale Centre for British Art) had captured the innocence of children  and the sentiments that pretty children invoke in adult spectators. The portrait of Miss Davison, dates from one of the most interesting periods in Millais' career, shortly after he painted My First Sermon and My Second Sermon (Guildhall Art Gallery, City of London; two versions of the former sold in these rooms, 19 November 2008, lot 140 and 15 July 2008, lot 55)
Millais' paintings of children are always characterful; they always have their own personalities and are not simply decorative children. Thus, when he portrayed Miss Davison he captured her chubby grumpiness at being made to pose for an artist on an oversized piece of furniture, the carved grotesques of which add to the playful humour. Her voluminous white gown compliments the effect of making her appear diminutive. The lacquered cabinet and painted fan show the fashion for Japanese art in the 1860s, also demonstrated in contemporary work by Rossetti and Tissot.
Posted by Hermes at 9:48 AM