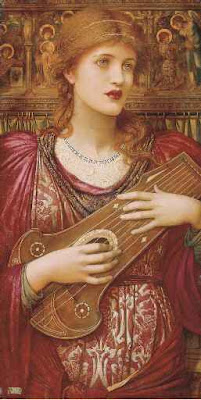 'Thy Music, faintly falling, dies away,
Thy dear eyes dream that Love will live for aye'
G.F. Bodley

Strudwick was born in Clapham, and educated there at St Saviour's Grammar School. Refusing to contemplate a career in business, he studied art at South Kensington and the Royal Academy Schools, but was a singularly unsuccessful student. The only visitor to the Schools who encouraged him was the Scottish artist John Pettie (1839-1893), whose fluent brushwork, typical of the pupils of Robert Scott Lauder at the Trustees' Academy in Edinburgh, he emulated for a time. A picture illustrating the ballad of 'Auld Robin Gray', exhibited at the Royal Society of British Artists in 1873 and sold in these Rooms on 5 November 1993, lot 181, is an interesting record of this early phase.

Strudwick eventually found his feet in the mid 1870s, when he acted as a temporary assistant first to J.R. Spencer Stanhope and then to Burne-Jones. Songs without Words, the picture with which he made his first and only appearance at the Royal Academy in 1876, shows his mature style formed, and it underwent little development from then on. Like so many of the younger 'Aesthetic' painters and Burne-Jones followers, he exhibited at the Dudley Gallery, at the Grosvenor Gallery from its dramatic opening in 1877, and finally at the New Gallery, which inherited the mantle of the Grosvenor in 1888. Despite his inauspicious start, he enjoyed considerable success; as George Bernard Shaw wrote in an article about him in the Art Journal for April 1891, 'there is no such thing in existence as an unsold picture by Strudwick'. Songs without Words was bought by Lord Southesk, a Scottish peer with antiquarian interests. A Golden Thread (1885) was acquired for the Chantrey Bequest as part of the Royal Academy's current campaign to woo the Burne-Jones school; and two wealthy Liverpool collectors, William Imrie and George Holt, became longstanding patrons. Bernard Shaw's article was a further sign of success. Shaw's main thesis is that Strudwick's very incapacity as a student was the making of him as an artist; he quotes Strudwick's comment that 'he could not draw - never could', and interprets this as 'a priceless gift', saving him from the empty virtuosity - 'execution for execution's sake' - which had become so common among young artists, especially those who had spent 'a couple of seasons in Paris'. Shaw also recorded that Strudwick had 'a fine sense of humour', something one would hardly guess from his pictures, and that he had never visited Italy, although critics often complained that his pictures were little more than pastiches of early Italian work.

Strudwick lived all his adult life in Hammersmith or Bedford Park, not far from Burne-Jones and his fellow assistant in Burne-Jones's studio, T.M. Rooke. His daughter Ethel, born in 1880, was to become High Mistress of St Paul's Girls' School, situated locally, in 1927. Strudwick was still contributing to the New Gallery in 1908, when it held its last but one exhibition, but he seems to have ceased painting about this time although he lived on until 1937. His Times obituary described him as 'a beautiful old man... (and) a charming personality, exceedingly kind to young artists'.

The present picture was exhibited at the New Gallery in 1893, three years after The Gentle Music of a Byegone Day, which was sold in these Rooms on 11 June 1993 (lot 130) and is now in the Lloyd Webber Collection. Like that well-known work, it has all the hallmarks of Strudwick's style, or, to put it another way, is a perfect demonstration of Aesthetic values. There is no narrative subject. Instead, mood is established by means of a musical reference, while a beautiful model in exotic draperies provides the pretext for a ravishing visual ensemble. Even the haloed figures in the frieze behind the girl's head seem to have no symbolic significance, being introduced merely for decorative effect and to suggest a vaguely medieval-cum-Renaissance mise-en-scène. Particularly typical of Strudwick is the extreme emphasis on surface pattern and texture. It is as if embroiderers and goldsmiths have been literally at work, bringing every detail to the highest pitch of polished perfection and finesse.

The picture seems to have received little attention in the press, apart from a characteristically hostile review by F.G. Stephens in the Athenaeum. Strudwick's work was anathema to Stephens, and every year he would slate his contributions at the Grosvenor and New Gallery exhibitions. This was no exception.

If press reaction was disappointing, however, the picture could hardly have had a better provenance, or one that suggests a keener apreciation of its qualities. It seems to have been bought direct from Strudwick by William Imrie (1837-1906), a partner in the Liverpool shipping firm of Ismay, Imrie & Co. (the White Star Line), who, as already noted, was one of Strudwick's most important patrons. In fact he was the most important. His posthumous sale at Christie's on 28 June 1907 included no fewer than six Strudwicks, the present picture among them, but there were also others. Witheld for one reason or another were a St Cecilia reproduced in Bernard Shaw's article (which is entirely illustrated with pictures from the Imrie collection), a pair of Angels offered in these Rooms on 5 March 1993 (lot 109), and The Ten Virgins, which Christie's sold in London on 13 June 2001 (lot 12). In view of the small number of pictures that Strudwick painted, this is an astonishing record. Two of the most important Strudwicks in the collection, Evensong (1898) and the large version of Passing Days (1904), were included in the Last Romantics exhibition at the Barbican Art Gallery, London, in 1989 (nos. 46, and 47). Imrie also owned eight works by Evelyn De Morgan, another Burne-Jones follower, together with examples of Burne-Jones himself, D.G. Rossetti, Spencer Stanhope, Leighton, Alma-Tadema and others.

Imrie was one of a group of Liverpool shipowners and merchants who formed comparable collections of pictures at this period. Others were his partner T.H. Ismay (1837-1899), George Holt (1825-1896), whose collection remains intact at Sudley, and F.R. Leyland (died 1892), who patronized Rossetti, Burne-Jones, Whistler and others on such a princely scale and created one of the greatest 'Aesthetic' houses of the day at 49 Prince's Gate in London. As Edward Morris has observed, there was almost certainly a connection between Imrie and Holt, who also owned a Burne-Jones and bought a number of pictures by Strudwick in the 1890s. They lived near one another in Mossley Hill, a suburb of south Liverpool, and must have been acquainted. They were both businessmen of a reclusive type, not too strenuously engaged in commerce or public life, which may help to explain why they responded to the contemplative art of Burne-Jones and his school. On the other hand, we cannot assume that they were inspired by Leyland, despite his dazzling example of patronage in this field, since Leyland's collecting took place in London, and he himself was deeply unpopular in Liverpool. It is true that Imrie's partner, T.H. Ismay, employed Norman Shaw to build his country house, Dawpool, at Thurlaston in Cheshire, and that Shaw was responsible for creating Leyland's great interior in Prince's Gate; but even this link is weakened by the fact that Shaw had an extensive clientele in the Liverpool area.

In recent times, 'Thy Music...' has had two more distinguished owners. The writer and broadcaster Sir Tim Rice owned it in the 1970s, and in 1987 it was acquired by the late P.C. Withers of Reading, a leading authority on Strudwick whose guidance is sorely missed.

The couplet that gives the picture its title is by G.F. Bodley (1827-1907), the emminent Gothic Revival architect who was so closely associated with the later Pre-Raphaelite movement. In fact Bodley supplied the titles not only for 'Thy Music...' but for a second picture that Strudwick exhibited at the New Gallery in 1893, no. 19:

'Let come what may, for that grim Fate decides,
Love rules the day, and Love, enthroned, abides'.

It would be interesting to know which came first, the pictures or the poetic titles, and also to learn more about the relationship between Strudwick and Bodley which, on this evidence, would appear to have been quite close. All we can say at present is that a friendship would fit in with the fact that Bodley worked professionally with both Strudwick's masters, Burne-Jones and Spencer Stanhope. He also owned examples of their work. The early Burne-Jones triptych in the Tate Gallery was his; so was Stanhope's Our Lady of the Water Gate, sold in these Rooms on 15 November 1992, lot 120.

'Thy Music ...' is extremely unusual in being signed and dated. Strudwick rarely signed his pictures and may have had some special reason, such as a request from the buyer, for doing so on this occasion.
Posted by Hermes at 6:00 AM