Arthur Hughes - Home from the Sea 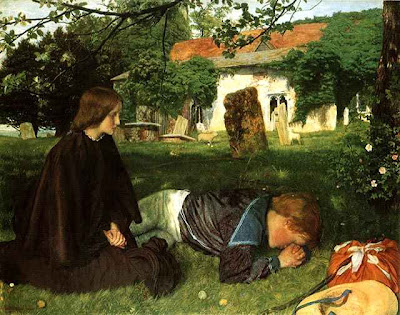 Hughes. who met Brown, Hunt and Rossetti for the first time in 1850, was an early convert to the art of the Brotherhood. Although less ambitious in his choice of subjects than his friends, he knew how to invest the fresh. light-filled detail of the English landscape with the poignancy of ordinary life. The background of Home from Sea was painted in the graveyard of Chingford Church. Essex, in 1856. He exhibited it in 1857 as A Mother's Grave. The appearance of the picture, at this stage. is known from a study. by Hughes, in the Ashmolean [see below). Later, perhaps in response to critics who did not like the way the boy was painted, he added the figure of his sister, which is modelled on his wife, and exhibited this revised version at the Royal Academy in 1863 with the present title. In keeping with the Pre-Raphaelite practise, the detail is not gratuitous but is used to reinforce the pathos of the subject. Ephemeral things - the spider's web. wet with dew, the dog roses, the dandelion seed - all draw attention to the theme of transience while the boy's 1oss is retold, allusively, in the detail of the sheep separated from its lamb by the barrier of the tomb. 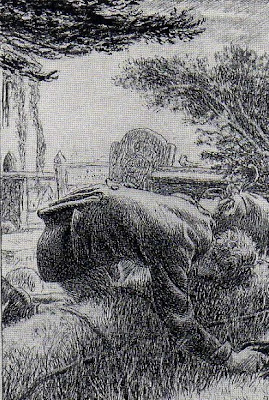