The Coast of Sicily from the Taormina Cliffs 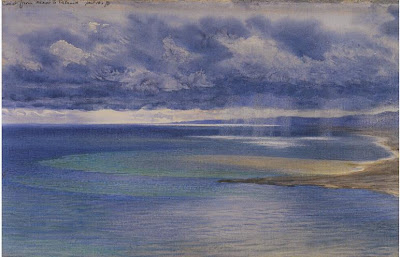 Commentary by The Maas Gallery

This watercolour shows the promontory of Naxos from the Taormina Cliffs, with Etna out of the picture to the right. It dates from a trip Brett made to Italy in the winter of 1870/1 (the date on the picture is a mistake by Brett, forgetting to roll over the New Year) to observe an eclipse of the sun (the trip was organised by the Royal Astronomical Society - Brett was a keen amateur scientist and astronomer, and was accompanied by several scientists. They survived shipwreck on the way. Brett later described the eclipse in a paper for the RAS).
It was his third trip to Sicily. His first ii 863/4 resulted in his Massa, Bay of Naples (Indiananpolis Museum of Art), whilst this trip resulted in his Etna from the Heights of Taormina (Sheffield Galleries and Museums Trust), to which our watercolour is closely related - but our watercolour, of sea and cloud, showing the coast that is out of view to the left of the Etna painting, is concerned more with a majestic and sparkling weather effect, an instant quickly caught, than with the detailed topography of Etna in the large finished oil. He painted another watercolour on the very same day for the second big picture to result from this trip, The Sicilian Sea, from the Taormina Cliffs (the first version 'went to the bad owing to Roberson's medium5, whilst the second, painted in 1893, was exhibited at the RA in that year and is now in a private collection).
Posted by Hermes at 9:54 AM