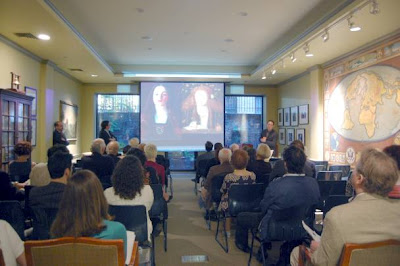 Tim Barringer and Jason Rosenfeld present their forthcoming exhibition, Pre-Raphaelites: Victorian Avant-Garde, at the English-Speaking Union of the United States, New York, May 2012
http://www.amazon.co.uk/Pre-Raphaelites-Victorian-Avant-garde-Tim-Barringer/dp/1849760152
to be published
5 Sep 2012
Combining rebellion and revivalism, scientific precision and imaginative grandeur, the Pre-Raphaelite Brotherhood shook the mid-nineteenth-century art world and were effectively Britain's first modern art movement. Today the works of the Pre-Raphaelites are among the best known of all English paintings, and yet they have sometimes been dismissed as Victoriana or mere escapism. This book corrects that view. Accompanying a major international touring exhibition, it examines works in a wide variety of media, demonstrating the broad scope of the movement's revolutionary ideas about art, design and society. Led by Dante Gabriel Rossetti, William Holman Hunt and John Everett Millais, the Pre-Raphaelites rebelled against the art establishment of their day and were committed to the idea of art's potential to change society. Their unflinchingly radical style, inspired by the purity of early renaissance painting, defied convention, provoked critics and entranced audiences. Many of the most famous Pre-Raphaelite paintings are featured, including Millais' Ophelia and Madox Brown's The Last of England, alongside less familiar works. In contrast with previous Pre-Raphaelite surveys, this book also includes sculpture, photography and the applied arts, the latter showing the important role the Brotherhood played in the early development of the Arts and Crafts movement and the socialist ideas of the poet, designer and theorist, William Morris (1834-1896). Extensively illustrated, with essays by leading international authorities in the field, this will be the key work on the "Pre-Raphaelites" for years to come.
Posted by Hermes at 10:10 AM