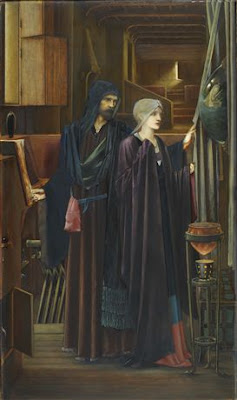 This picture may have begun as early as 1891, although Burne-Jones’s account books list him as working on it beginning in 1896. There is some association with Shakespeare’s Tempest, the older man reveals an image of a shipwreck to the young girl, in his convex mirror, although Burne-Jones referred to it as his ‘Maiden and Necromancer picture’ (see Lago, p. 84). It is believed that the wizard himself is the artist in his younger years, and the young girl was modelled by Frances Graham Horner, daughter of his primary patron since the 1860s, William Graham, and as a result, is often biographically interpreted. Two compositional studies for this picture exist, both in Private Collections; sold at Christie’s in 1970 and 1971, respectively.