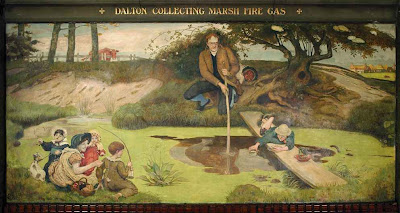 [Dalton collecting Marsh-Fire Gas]
In the 1850s, Brown was associated with the Pre-Raphaelites when he produced his masterpiece, Work, now in Manchester Art Gallery. The murals are later works, begun in 1879, but not completed until 1893, the year Brown died. During this period he moved from London with his family, living first at Crumpsall, then at Victoria Park.
http://www.manchester.gov.uk/site/scripts/documents_info.php?categoryID=200064&documentID=1972&pageNumber=1
Posted by Hermes at 6:00 AM