The Sphinx Gizeh Looking towards the Pyramids of Sakhara: 1854 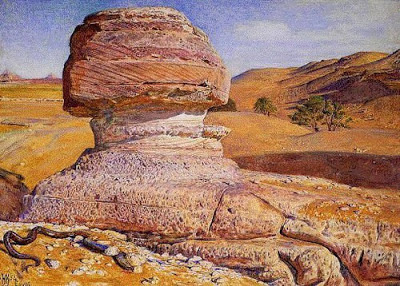 The Egyptian Sphinx is represented by a human head on the body of a lion; it is always in a recumbent position with the fore paws stretched forward, and a head dress resembling an old-fashioned wig. The features are like those of the ancient Egyptians, as represented on their monuments.
The colossal Sphinx, near the group of pyramids at Jizeh, which lay half buried in the sand, was uncovered and measured by Caviglia. It is about 150 feet long, and 63 feet high. The body is made out of a single stone; but the paws, which are thrown out about fifty feet in front, are constructed of masonry.
The Sphinx of Sais, formed of a block of red granite, twenty-two feet long, is now in the Egyptian Museum in the Louvre. There has been much speculation among the learned, concerning the signification of these figures. Winckelmann observes that they have the head of a female, and the body of a male, which has led to the conjecture that they are intended as emblems of the generative powers of nature, which the old mythologies are accustomed to indicate by the mystical union of the two sexes in one individual; they were doubtless of a sacred character, as they guarded the entrance of temples, and often formed long avenues leading up to them.
Posted by Hermes at 6:50 PM