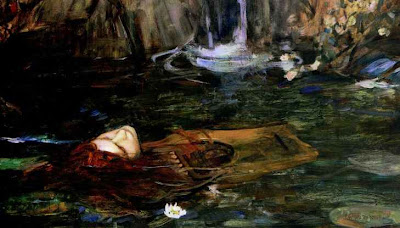 'Waterhouse's imaginative power is emphasized by the floating head with its hair entwined in the floating lyre; in reality, this grouping would keep the two objects together, but here it also alleviates the stark horror of the disembodied head. Notice, too, the final accent of the flower placed centrally among the hair.' (Anthony Hobson, J. W. Waterhouse, 1980, p. 117)

The present painting relates o Waterhouse's Royal Academy exhibit of 1901 Nymphs Finding the Head of Orpheus (private collection), painted in 1900 in which two female deities have happened upon the head of the musician floating in the river Herbrus where they are fetching water. Following Orpheus' loss of his wife Eurydice, he roamed the land inconsolable and absorbed by his grief and his refusal to concede to the advances of the Thracian Bacchantes incurred their terrible wrath. After his frenzied murder, his severed head was cast into the river with his lyre and as he water lapped over the strings of the instrument, it played a mournful tune to the accompaniment of his singing which continued even after death. The subject was one that was popular in fin de siècle Europe, in the work of the likes of Odilon Redon, Gustave Moreau and Jean Delville and of all Waterhouse's paintings The Head of Orpheus is perhaps Waterhouse's most Symbolist, transcending a purely narrative subject and embodying the eternal spirit of music.

The concentration upon the head of Orpheus with the harp in the present painting is arguably more powerful than the finished painting, as it centres upon the theme of melancholic music without the distraction of the auxiliary nymphs. Anthony Hobson has explained the importance of this picture in the evolution of Nymphs Finding the Head of Orpheus; 'The apparently effortless nature of the painting, to which Waterhouse's mastery of the figure contributes, is belied by such detailed analysis. The time and thought devoted to it are attested not only by the preliminary pencil and oil sketches showing significant differences in the composition, but by a full-scale study in oils of the floating head, comparable in treatment to the finished work.' (ibid Hobson, p. 117)
Posted by Hermes at 6:00 AM