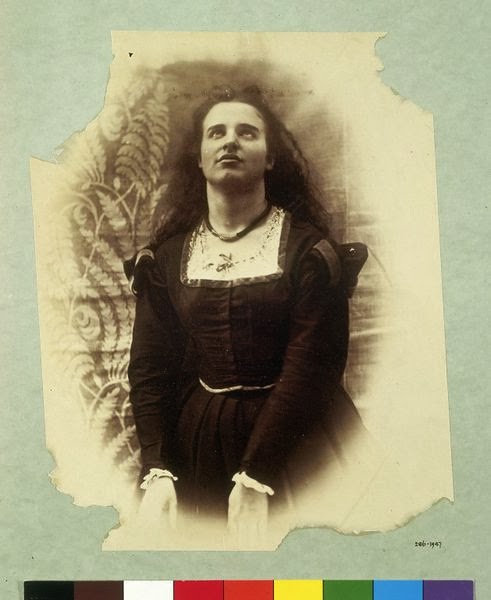 Virginia Dodier has compared this photograph to William Holman Hunt’s painting The Awakening Conscience (1853-4), which is now in Tate Britain, London:
'Clearly both works share the same subject: a moment of revelation. In the painting, Holman Hunt provides many clues to help the viewer understand a complicated story that carries a simple moral of redemption. As in most of her photographs, however, Hawarden gives few clues to her meaning and, as always, the photograph is untitled. The vignetting [isolating a portrait from its background] of the photograph during printing softened the edges and obscured the object in Clementina’s hands, which appears to be a die-throwing cup, an allegorical attribute of fate. The snake - a reminder of temptation before the fall [of Adam and Eve] - clasped round her throat further suggests her role as a fateful female.'

http://collections.vam.ac.uk/item/O93991/clementina-maude-5-princes-gardens-photograph-hawarden-clementina-viscountess/
Posted by Hermes at 7:32 AM