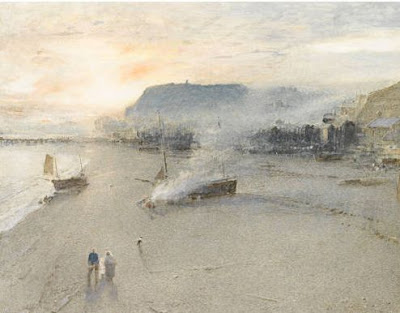 The historic town of Hastings was painted by many Victorian artists. Goodwin chose to paint the scene at sunset very much in the style of Turner, the artist he admired most. Goodwin worked both in oil and watercolour, but it was his watercolour technique which was particularly highly regarded for its poetic style and experimentation. In this work, both watercolour and gouache are used in a variety of techniques that include blotting, sponging and scraping.

In later life, Goodwin developed the use of pen-line on top of watercolour as well as more extensive stippling. He modeled landscapes with sponges of colours and lower tones, creating large expanses of abstract colours adding later detail to delineate the scenery. Goodwin focused on light and atmosphere in his works, as can be seen in this painting. His use of grey emphasizes the reds, oranges and yellows, creating a stunning sunset. Martin Hardie wrote of Goodwin that "he can be counted as one of those who have successfully dealt with twilight and sunset."

Goodwin first exhibited at the Royal Academy in 1860 at the age of 15 and he became a highly regarded member of the Royal Watercolour Society. He is best known for his landscapes but he also painted biblical, allegorical and imaginative subjects. He studied under Arthur Hughes and Ford Madox Brown who were leading members of the Pre-Raphaelite brotherhood and inspired much of his early work, although their influence waned after the 1880s. John Ruskin was also a mentor and friend and the two travelled together extensively throughout Europe which, along with Goodwin's other prolific travels, inspired many of his works. He considered painting a religious act, stating "for is he not one who is helping to open the eyes of the blind that they see the hand of our Heavenly Father in the things that he has made for our delight?"

A contemporary reviewer once wrote that "he stands quite alone in his power of imparting a touch of fairy influence to his landscapes" and another wrote "he is almost the only one whom landscape receives any touch of ideal quality.
http://www.bonhams.com/eur/auction/18883/lot/109/
Posted by Hermes at 4:22 PM