John Everett Millais - A Roundhead Conventicle: A Scene from Sir Walter Scott's 'Peveril of the Peak' 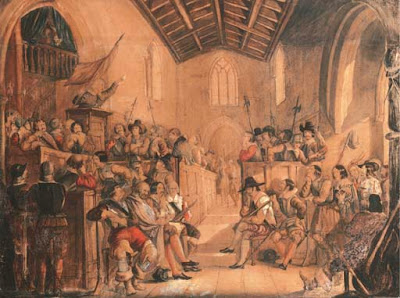 signed and dated 'J.E.Millais 1841' (lower right, on a roundhead's coat) and with inscription 'This remarkable drawing was made by my brother, Sir John Everett Millais, at the age of 11/12 years. I, myself, was a schoolboy at King's College School and can well remember him at work at it and the great excitement we all felt at home during its execution. I have written ... to guarantee the genuineness of this work as it is almost incredible that it should have come from so young a child. W.H. Millais' (on the reverse)
pencil, watercolour and oil
, heightened with touches of white and with gum arabic on two joined sheets
34¾ x 46¼ in. (88.4 x 117.5 cm.)

In his biography of his father, J.G. Millais describes this drawing as 'the most elaborate work of (the artist's) early years'. It was executed in 1841, when Millais was eleven or twelve, and his brother, William Henry Millais, later felt it was necessary to put a notice on the back 'guaranteeing' its 'genuiness ... as it is almost impossible that it should have come from so young a child.' Millais had entered the Royal Academy Schools, as their youngest ever student, in 1840, and soon proved his brilliance. He won the silver medal for a drawing from the antique in 1843, exhibited for the first time at the Royal Academy in 1846, and carried off the coveted gold medal in 1847.

This drawing is an illustration to Sir Walter Scott's novel Peveril of the Peak (1831). The story is set at the time of the Civil War, and the incident depicted is the fiery and radical Roundhead conventicle described in Chapter 43.

Julian now doubted not that he was in one of these conventicles which, though contrary to the existing laws, still continued to be regularly held in different parts of London and the suburbs ... About two hundred persons were assembled ..., in an area filled up with benches, as it were for the exercise of worship; and they were all of the male sex, and well armed with pikes and muskets, as well as swords and pistols. Most of them had the appearance of veteran soldiers, now past the middle of life, yet retaining such an appearance of strength as might well supply the loss of youthful agility. They stood, or sat, in various attitudes of stern attention; and, resting on their spears and muskets, kept their eyes firmly fixed on the preacher, who ended the violence of his declamation by displaying from the pulpit a banner, on which was represented a lion, with the motto Vicit Leo ex tribu Judae.

The torrent of mystical yet animating eloquence of the preacher - an old grey-haired man, whom zeal seemed to supply with the powers of voice and action of which years had deprived him - was suited to the taste of his audience, but could not be transferred to these pages without scandal and impropriety. He menaced the rulers of England with all the judgements denounced on those of Moab and Assyria; he called upon the saints to be strong, to be up and doing; and promised those miracles which, in the campaigns of Joshua and his successors the valiant Judges of Israel, supplied all odds against the Amorites, Midianites, and Philistines. He sounded trumpets, opened vials, broke seals and denounced approaching judgments under all the mystical signs of the Apocalypse. The end of the world was announced, accompanied with all its preliminary terrors.

The drawing's provenance offers a fascinating insight into the changing fortunes of Victorian art in the twentieth century. In the possession of the Millais family until 1923, it was then bought by the first Lord Leverhulme, who formed one of the last great collections of Victorian paintings. Indeed, by 1923 the reaction was already far advanced, and Leverhulme himself died two years later. The eclipse lasted until the 1950s and in 1958 the drawing was one of many items that were sold off by the trustees of the Lady Lever Art Gallery. It was the worst possible time to throw them on the market; prices were at rock bottom, and the Millais itself was bought for a mere ten guineas.

However, the tide was about to turn. The 1960s saw the beginnings of a vigorous revival, marked by exhibitions, books and dealing activity. Mary Bennett's Millais exhibition, still the landmark in the artist's rehabilitation, took place in Liverpool and London in 1967, less than a decade after the Lady Lever sale. The Forbes Collection, which was to play a leading role in the revival for over thirty years, was launched in 1970.

We are grateful to Malcolm Warner for his help in preparing this entry.
Posted by Hermes at 1:00 PM