Roddam Spencer Stanhope - Thoughts of the Past 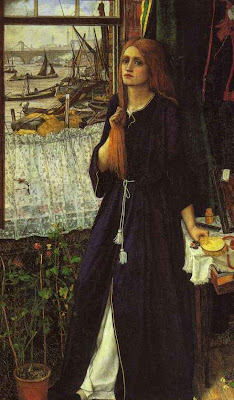 1859
Tate Gallery
Stanhope is very interesting and considered one of the second-generation Pre-Raphaelites, though he was part of the Oxford mural painting party in 1857. He was a founder member of the Hogarth Club which directly followed the PRB.
http://en.wikipedia.org/wiki/Hogarth_Club
This picture of a prostitute looking remorsefully back on her past has been compared with Rossetti's Found and Hunt's Awakening Conscience, highighting a big social issue of the time.
http://www.artmagick.com/pictures/artist.aspx?artist=john-roddam-spencer-stanhope
Posted by Hermes at 6:00 AM